Why natural deodorant is suddenly everywhere

Fueled by the desire to take better care of ourselves — or at least to think that’s what we’re doing. 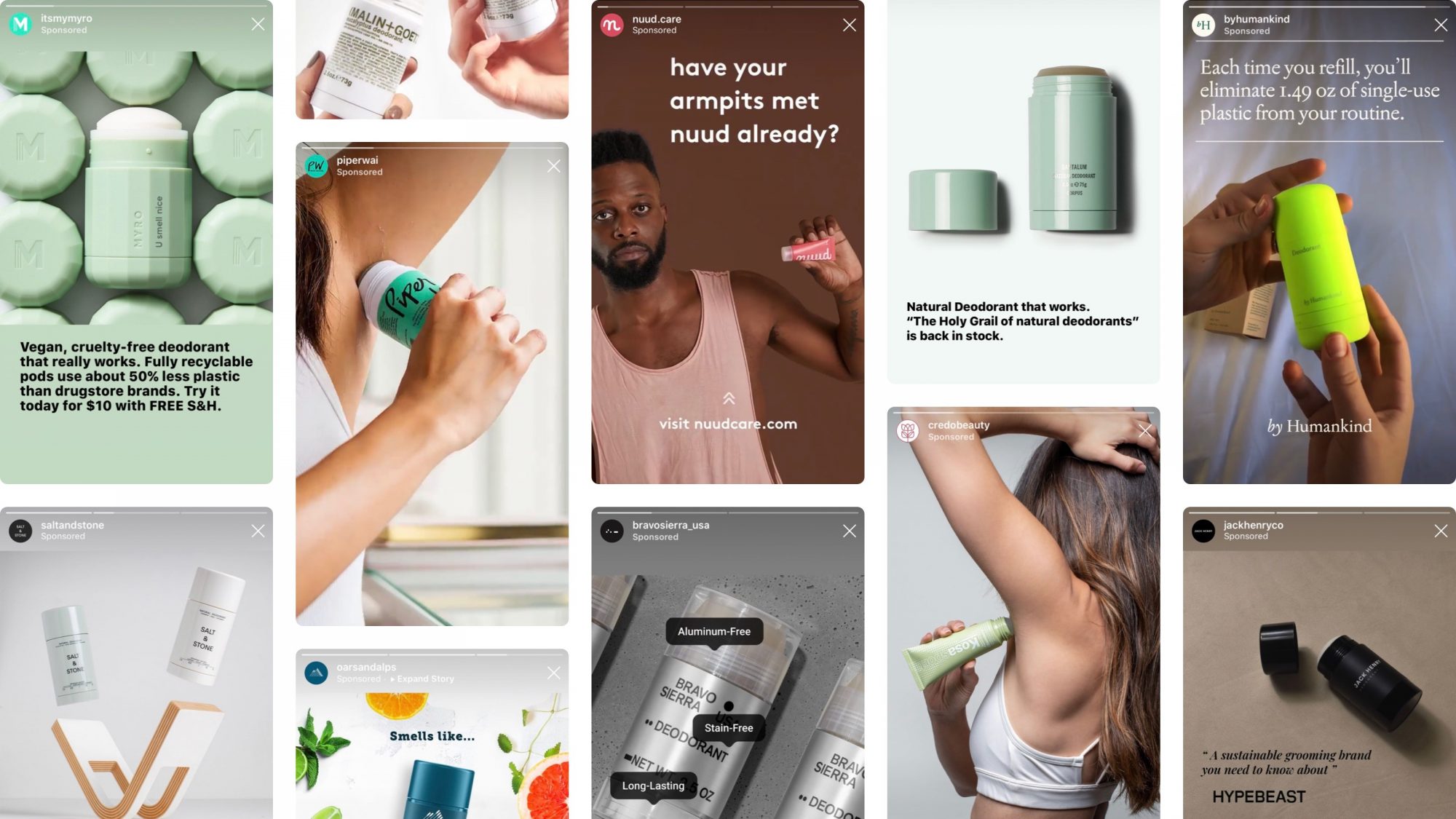 When “clean” cosmetics brand Kosas launched a new deodorant line last month, it represented an opportunity for the Los Angeles-based beauty company to expand into a new business, the growing category of “natural” personal care products.

“But on a more personal note,” says Kosas founder and CEO Sheena Yaitanes, “I have very bad B.O., and I needed to solve that problem.” “And now I don’t anymore.”

Natural deodorant is not a new concept: Tom’s of Maine started selling it ages ago in scents like “Spicy Herbal” and Apple. But it has evolved, and has become increasingly popular over the past decade, thanks in large part to Schmidt’s Naturals, founded by Jaime Schmidt 10 years ago, and Native, founded by Moiz Ali in 2015, which grew the category with successful products, brands, and distribution.

Like many “natural” products, there isn’t a precise definition or official certification of what makes a deodorant natural. They generally don’t include aluminum, which traditional antiperspirant deodorants use to clog your sweat pores, or chemical preservatives called parabens. Both have drawn health-related suspicions.

To put a number on it: In one sitting, over the span of a couple of hours, I tracked down 87 brands offering one or more varieties of natural deodorant, from Aēsop to Zaffré. And I am probably under-counting by a lot! While not every brand is compelling, each has its own combination of formula, aesthetic, format, packaging design, scents, mission, pricing, and point of view.

“I was really trying to understand: What’s a hack for B.O.?” Yaitanes tells me.

Because natural deodorants don’t block sweat pores like antiperspirants do, the goal is to figure out a way to neutralize the bacterial growth in your armpit that leads to body odor.

Yaitanes says she found a Reddit thread where people were talking about applying alpha hydroxy acid toners to lower their armpits’ pH levels — making the environment less conducive for bacteria — and ran with the concept. Kosas tested some 100 formulas over 15 months, launching with a blend that it claims can stop odor while also soothing and brightening armpit skin.

Another startup, New York-based By Humankind, has focused on a broader environmental sustainability mission of eliminating single-use plastics from personal care products, from body wash to dental floss.

When the company started developing natural deodorant as its first product, the idea was to formulate something that was “so healthy that we, as founders, would be willing to eat the product in front of your face,” co-founder Brian Bushell tells me. (“That’s how we got our first check — we ate the unscented deodorant,” he says. “It tastes a little bit saltier than cottage cheese.”)

But more interesting than its nutritional value is its packaging: A sturdy, patent-pending deodorant container that’s refillable. Sticks of its $12 deodorant, in scents like Lavender-Citrus, Rosemary-Mint, and Coconut, arrive in paper tubes that you slide into the reusable dispenser — which is handsome enough that you might just leave it out on the counter.

Others that caught my eye? Iyoba’s $15 probiotic deodorants, in scents like Ylang Ylang and Jasmine, are handmade by founder Efiya Asabi in Oakland. PiperWai — as seen on Shark Tank — offers a stick or a spread-on cream format.

And Corpus, founded in 2018 by J.P. Mastey — who previously led and sold the grooming brand Baxter of California — is trying to build a modern luxury personal care brand in Los Angeles, starting with deodorant.

The company’s natural deodorant sticks cost $24 and are available in six scents, such as The Botanist, Third Rose, and my favorite, the smoky Cedar Flora.

The idea, Mastey explains: “Elevate something that wasn’t elevated before. Take a mundane product you use every single day and don’t think much about. And actually shift that, and make it one of the products you actually love — not just a product you’re forced to use.”

Why such a boom?

Like many categories of consumer goods, the “natural” personal care market has grown in recent years, fueled by the desire to take better care of ourselves — or at least to think that’s what we’re doing.

Deodorant is applied to your skin, close to organs, usually daily, so the desire to use something natural — and avoid potential toxins — makes sense, if it’s effective.

That desire has only strengthened during the Covid-19 pandemic, which has brought health and wellness to the forefront, and has forced many to significantly change their daily habits, including work, commuting, socializing, and travel.

The pandemic has also accelerated the shift to e-commerce. Deodorant, historically, is mostly purchased at retail: The research firm Euromonitor says e-commerce represented just 2% of the nearly $5 billion US deodorant market last year. The shift should favor direct-to-consumer and digital-first brands — including many of the natural deodorant companies mentioned in this article — at the expense of those that rely on mass retail.

This combination has inspired people to try new things over the past several months, especially products like natural deodorant, which still has a reputation for not working very well or requiring some sort of smelly “detox” period.

That’s how I got involved, at least.

Early in my Covid-19 lockdown, eyeing the stick of Corpus that my wife had purchased in a London boutique — and realizing I wasn’t going to be around many strangers for a while — I got curious and started ordering miniature samples.

I’ve now been “natural” for around four months, rotating between Ursa Major’s Hoppin’ Fresh, various Corpuses, Salt & Stone’s Eucalyptus and Bergamot, the Kosas, and others.

How is it? It’s not the same level of protection as the harsh, goofy-scented, mass-brand antiperspirants I wore daily for more than 25 years. I’m not sure that I’d be confident trusting natural deodorant in my old routine, running around sweaty New York, riding the subway, and in and out of meetings.

But for this version of life, where I’m either around the house or out on a run, it’s totally fine! The scents are much better. My t-shirts are happy. The whole thing feels much more current.

Still, why are there so many natural deodorant brands?

One big thing, to reiterate, is that deodorant is a daily habit for most people, and when they find a brand and scent they like, they tend to stick with it for a while — months or years.

Another, which I heard from several people in the industry, is that deodorant is also a strong gateway product for people to get into natural personal care more broadly.

The vast majority of Americans — probably more than 90% — don’t yet use natural deodorant. The thinking, then, is that if they find a natural deodorant they like, they’ll be more likely to consider using other natural products, such as toothpaste or shampoo.

These are both important factors for direct-to-consumer brands, especially those using online advertising — which, my Instagram browsing confirms, is most of them — because they can potentially justify spending more money to acquire customers.

By Humankind’s founders, for example, say that, among its product lineup, deodorant has been great for both customer acquisition and retention, and that people “tend to opt for subscriptions” for it. For Kosas, its deodorant — launched under a sub-brand called Kosasport — is an opportunity to continue to expand beyond makeup, and attract a wider audience, including more men.

Another nuance: It’s not regulated. While formulating and designing a unique and effective natural deodorant is a lot of work, one helpful thing is that, unlike antiperspirant, it’s not regulated as an over-the-counter drug by the US Food and Drug Administration. This means it’s easier to get made, which may encourage more brands to try their hand.

But also credit two big acquisitions for “inspiring” a lot of the entrepreneurial activity here. Procter & Gamble, the consumer packaged goods giant, bought Native in 2017 for a reported $100 million, and soon after, Unilever announced that it was acquiring Schmidt’s Naturals.

That’s not to say there’s a bunch of nine-figure deals on the horizon. And in the meantime, the consumer giants — well aware of the trend — have also recently used their biggest legacy brands, P&G’s Secret and Unilever’s Dove, to dabble with aluminum-free formulas. P&G has also quietly incubated a natural deodorant brand, Each & Every.