Foxtrot is the store that every neighborhood deserves

Can Chicago’s upmarket convenience chain scale across the country? 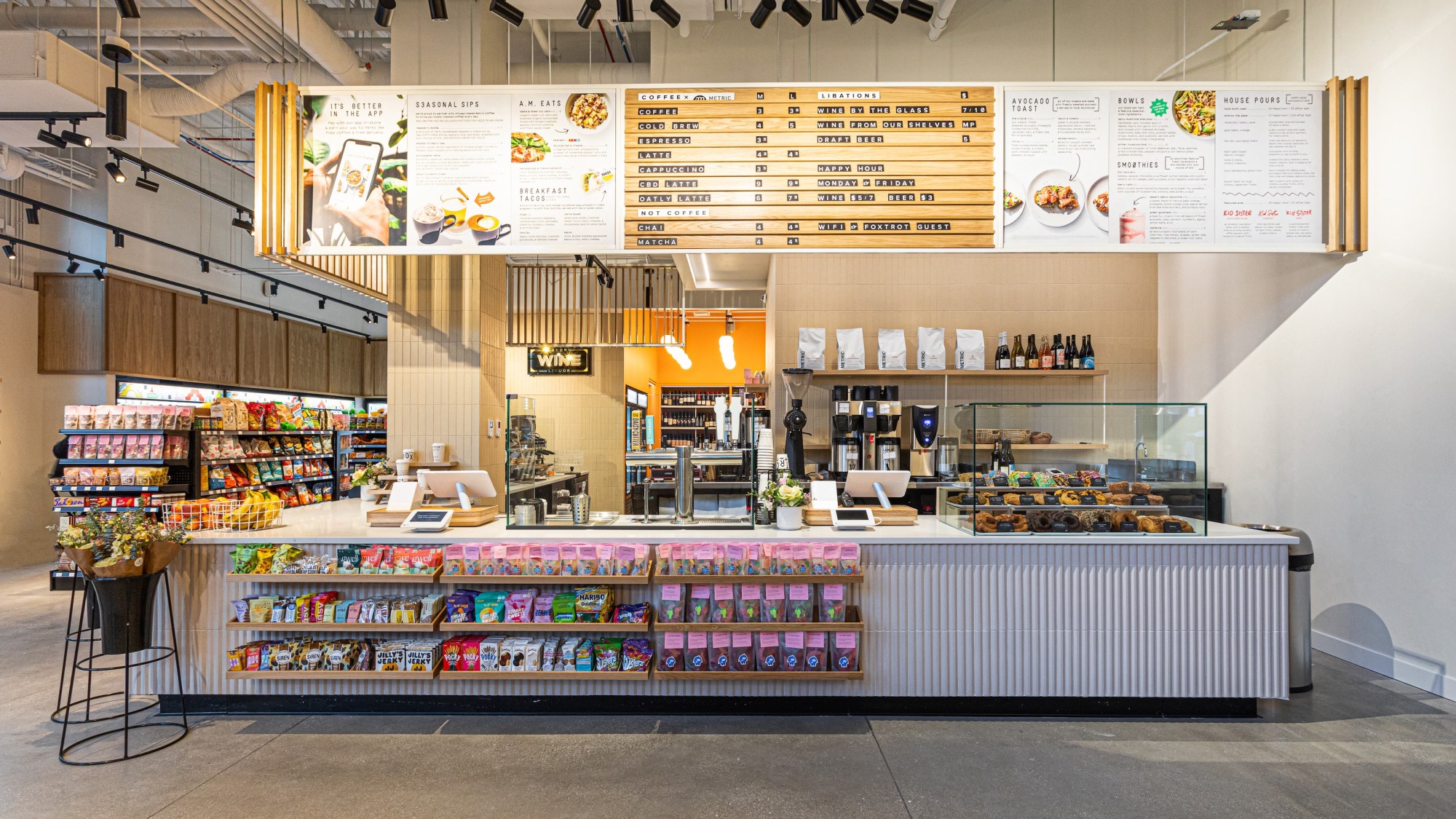 It’s late on a Tuesday morning in downtown Chicago and the space where I’m hanging out feels alive. People are reading, drinking coffee, chatting, taking calls, getting in an early lunch at the laptop. There’s free wifi, lots of light, and a big leather couch if that’s your thing — there will be wine later.

But this is not a hotel lobby, coworking space, or café: It’s a Foxtrot, one of the most interesting and best executed retail concepts I’ve seen in a long time — now in the early stages of what could become a national expansion.

I’d been hearing more about the company over the past few years, as Foxtrot — usually described as a modern convenience store — started to expand into new cities and invest in things like private-label products and nationwide gift-box e-commerce.

But Foxtrot, which launched its first retail location in 2015 and recently opened its 21st, is more than just another corner store or delivery app.

And after recently returning to Chicago — its hometown and mine — to spend some time in its newest and most ambitious stores, Foxtrot’s potential clicked for me.

Here’s some of what I learned. Today, in part one of a two-part special: What is Foxtrot?

1. Foxtrot is a place, and a feeling

Foxtrot is a few things: Upscale convenience store, third-wave coffee shop, and wine boutique, digitally equipped for pickup and delivery. Each of these pieces is important, and I’ll get into the details.

What’s unique is how Foxtrot has integrated all of these into a neighborhood retail space that’s welcoming and fun — a “third place” where you might actually want to spend time; where there’s been consideration and creativity applied to the user experience.

“The whole vibe of the stores is that it’s this warm, neighborhood spot where — yes — you can pop in and grab something quickly if you need to,” Foxtrot co-founder and CEO Mike LaVitola explains.

“But it’s a place that you’re excited to go to,” he says, “because you’re going to find something cool, there’s going to be some interesting music on, the folks behind the counter are going to be able to turn you on to something new.”

“Sort of the opposite of what you would get at a traditional corner store, where it’s cold, fluorescently lit, and it’s ‘get in and get out’ as quickly as you can.”

Foxtrot stores are high-end without feeling pretentious, in locations that seem intentional. There’s a spirit of hospitality that feels more like a restaurant than a grab-and-go market. For example, there is more seating than you’d expect — often between 30 and 40 seats — including outdoor patios. There are fun touches at some locations, like a walk-up “wine window.” Bathrooms exist and were clean during my visits. Wifi is free and noted on the menu board.

This sort of stuff — thinking about what people actually want and how every aspect of the retail experience should be designed — sounds obvious. But it’s rarely done well, particularly among chains, where there’s little to no taste, excitement, or ongoing innovation.

At Foxtrot, it feels like the people in charge actually care about the big picture and the details. And that’s why anything else here is worth paying attention to.

2. Foxtrot is a great store

Crucially, Foxtrot gets the main thing right: It’s building a convenience store for the modern consumer. For The New Consumer.

This means: A curated assortment of more than a thousand groceries, beverages, household items, and prepared foods, from the cutting-edge and adventurous to the hit staples. The chance to discover new brands and products and also to stick with comforting favorites. A current approach to what’s good to eat and drink, with the opportunity (but not obligation) to eat healthy. And a mix of brands, from tiny local startups to global household names.

At Foxtrot, for instance, you can buy new products from cool brands, like Momofuku instant noodles and tins of Fishwife smoked trout, but you can also buy a can of Campbell’s chicken noodle soup. You can buy exclusive Snickerdoodle Funfetti cookie kits made by local Chicago pastry legend Mindy Segal, or you can buy a box of strawberry Pop-Tarts. You can find a $39 bottle of Rosie Assoulin’s lively natural Vivanterre orange wine, or you can buy an $11 case of Bud Light.

I find some of the high-low juxtaposition amusing, but it’s really about providing choices to a broad group of consumers in a variety of situations.

Some days you might have the time and resources to cook dinner from scratch, and Foxtrot offers things like boneless chicken thighs, pre-sliced veggies, Rancho Gordo beans, local tortillas, spices, and sauces. Other days, you might just want to heat up some mac and cheese — and you can take your pick from at least a half-dozen packaged, frozen, and heat-and-eat options.

“It’s important to not push customers to one way or the other,” Mitch Madoff, Foxtrot’s SVP of private label and supply chain, explains, “but to meet them along their journey.”

3. Foxtrot is a legit café

This was a surprise. When’s the last time you had a great cup of coffee from a convenience-store chain? But Foxtrot is actually a real third-wave coffee shop, partnering with local roasters, like Metric in Chicago and Vigilante in DC, and, in my limited experience, serving dialed-in drinks.

In the morning, it offers breakfast tacos (a bit of Austin influence, where LaVitola and co-founder Taylor Bloom used to live), sandwiches, and toasts, including a classic avocado toast on local sourdough and a smoked salmon version with “Everything” seasoning.

Foxtrot’s approach to sweets is generally “yes,” and that’s on display in the pastry case, where you’ll find locally made bagels and croissants, but also “fruit loop” cookies and brightly colored Hardbitten pop tarts in flavors like Nutella Raspberry, topped with sprinkles (calorie count not listed).

For lunch, there are both grab-and-go and made-to-order salads and bowls, including a spicy mushroom miso bowl and an Elote Caesar Salad with roasted corn and masa croutons.

And in the evening, there’s wine — by the glass or bottle, no upcharges — with snacks from the prepared-foods fridge, including marinated olives and charcuterie trays. (A new afternoon café program and pizza are in the works.)

“The stores at night are, like, first-date incubators, which is really funny,” LaVitola says. “The music’s good and it’s way cheaper than going to a real place. If it’s going well, you can go to a nice restaurant. If it’s not, you can bail and not have spent that much.”

Coffee — and, more broadly, the café — is a more important part of Foxtrot’s strategy than I had gathered from a distance.

And it makes sense: As a habit-forming ritual, coffee can get customers into the store on a regular basis, both for a caffeine boost and to potentially purchase food or other items. The company has already sold almost a million cups so far this year, and the café — including prepared foods — represents roughly 30% of its business.

It’s also a huge operational challenge — employing cooks and training baristas — and it doesn’t always hit. I was excited about my burrata chopped salad, but the garlic vinaigrette overpowered everything and followed me around for the rest of the day.

Like most retailers, Foxtrot is increasingly investing in private label products and in-house brands.

Unlike other retailers, Foxtrot has hired Madoff — who previously ran Whole Foods’ 365 brand — to do something more sophisticated.

It shows. Foxtrot isn’t only making cheaper, higher-margin versions of commodity products, but is also using its point of view — and what it knows about its customers — to make new things you can’t easily get elsewhere.

This is useful for unit economics — private label now represents about 40% of Foxtrot’s revenue — but also to stand out in a world where most food retailers carry most of the same stuff.

The company is about to launch its first line of private-label candles, branded Little Thrills, and has made bath bombs under the name Best Bubs.

But its moves into private-label alcohol, led by Dylan Melvin, perhaps serve as some of the best examples of the Foxtrot POV:

(As an example, here’s how Sun Lips Rosé came to be: “We sell a ton of rosé in the summer,” LaVitola says. “We had a bunch of bottles, $15 and under, that were really productive. We had one bottle at $25 that was really productive. But we couldn’t find anything in that middle tier that’d work for us. And we knew from our data: Customers in this price point want something super super dry, pretty pale, and they prefer something from France.” Foxtrot tested options, sourced the wine, designed the brand and label, and voilà.)

But, crucially, these products also shape and build out the Foxtrot world: They show customers what they’d make them if they could make them anything — from the concept and the ingredients to the aesthetic and price — and what sort of ride they’re in for if they become Foxtrot loyalists.

And they give the company things to talk about that other stores simply don’t have — another important factor in today’s digital marketing era, where storytelling and media frequently drive discovery and consumption.

Almost every grocer has some sort of private label program, but the ones that do it best — Trader Joe’s, Costco, Whole Foods, Target — know that they’re building the brand with each new product, not just filling shelves or squeezing margins.

Foxtrot, so far, really seems to get that.

5. Foxtrot is half digital, with a clever loyalty program

In the rest of this extended feature, only for members: I explore Foxtrot’s digital business, which drives about half of its sales, its clever loyalty program, and the bigger picture: How does Foxtrot think about growth? Where does it fit into the future of modern convenience retail? And what I think about its chances. Join now to unlock this entire 4,000-word post and the full archive. Subscribers should sign in here to continue reading.

I’m a longtime tech and business journalist, and I’m excited to focus my attention on how technology continues to profoundly change how things are created, experienced, bought, and sold. The New Consumer is supported entirely by your membership — join now to receive my reporting, analysis, and commentary directly in your inbox, via my member-exclusive newsletter. Thanks in advance.